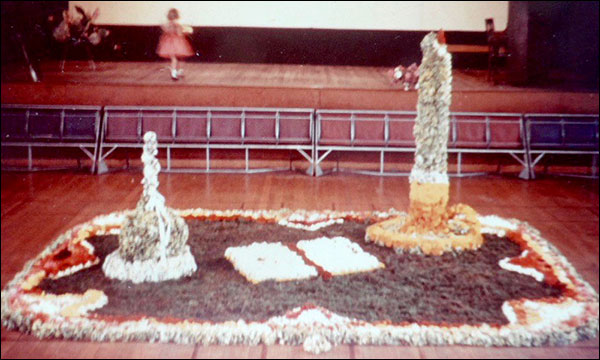 The Floral carpet, an outstanding feature of the annual Dahlia Show and Floral Carpet event over the past ten years, was one of the main attractions. It was formed with a backing of pine foliage with multi coloured dahlias forming triangles at intervals, and fringed with hydrangea, marigolds and golden glows. The centre piece depicted an open book made up of white dahlias outlined blue hydrangea. On the open page of the book was a spray of pink roses. Flanking the book in one corner was a giant bell of blue and green hydrangea, and diagonally across a candlestick, complete with candle, very artistically arranged with marigolds, golden glows, also blue and green hydrangea, the flame being represented by a red bloom.

The Bell, Book and Candle are symbolic and was made at the time of Sir Winston Churchill’s death:
Candle – Life; Book – Knowledge; Bell – Death

Mesdames Noel Thomas and G. Thomas Senior, also their band of helpers are deserving of great praise for their wonderful creation.

The thirteenth Annual Meeting and Election of Officers was held  at the Presbyterian Hall on 28 September.