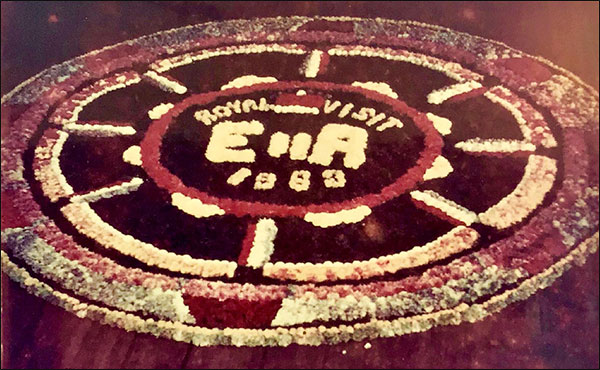 Commenting on the Floral Carpet and exhibits at the annual Floral Carpet and Dahlia Show, sponsored by the Maleny and District Horticultural Society in aid of the School of Arts funds, on Friday, Mr H. A. Robinson of Brisbane, who together with his wife, judged the entries, stated that in all their experience as judges, they had never seen a more magnificent work of art than the carpet on display that day. In their opinion, which was endorsed by all present, it would more than hold its own with anything of a similar nature elsewhere.

Despite the small attendance, the various stalls consisting of cakes, sweets, jumble and produce did a brisk trade throughout the day with a band of ladies of the School of Arts Auxiliary attending to the needs of those seeking refreshments. As a result of the function the School of Arts will benefit by approximately £60/-/-.

Entering the Hall from the outside gloom one was struck by the brilliance of the main attraction, the floral carpet, its theme being the current Royal Tour. On a circular background of pine needles the letters E.R.11 stood out boldly in yellow cactus dahlias with the words Royal Visit 1963 picked out in golden glows, all being surrounded by a crown consisting of deep red and white dahlia, the whole being surrounded by spokes of red and white dahlias and blue hydrangea and deep circles of myriads of massed dahlias, hydrangea and golden glows. Approximately 60 man-hours went into the design, preparation and creation of the carpet. Congratulations and appreciation go to Mrs O. Thomas senior, who designed it, also to her willing band of helpers.

The eleventh Annual Meeting and Election of Officers was held  at the Presbyterian Hall on 24 September.

Subscriptions:  Mrs Dunstan moved that the Annual subscription remains at 5/-, seconded by Mrs I Mitchell. Carried.