With perfect weather conditions, the Maleny and District Horticultural Society held its monthly meeting at the residence of Mr and Mrs W. Bergann, Witta on February 7. There was a good attendance of members. Approximately 35 visitors from the Buderim Garden Club were present. They hoped this would be the forerunner of an interchange of visits. Mrs McDonald, a visitor from Peachester, brought along a South African lily to show the society, and members showed great interest in this specimen.

There is no record either in the minutes or the Nambour Chronicle regarding the Dahlia Show (Floral Carpet) other than the comment below:
Mrs Riordan to be in charge of the Floral Carpet. The Apex Club was asked to supply the greenery for the carpet,

Mrs Bergann thanked all for their help and support at the Dahlia Show and said she felt sure it being so successful that every member had done their best to make it so. It was decided to make next years dahlia show a non-competitive display.

The secretary was instructed to write a letter of appreciation and farewell to the immediate Past President (Mr A. Lockwood) who has been forced to relinquish his farm and nursery at Conondale through ill-health and is leaving the district.

Bleak weather, sickness and the fact that many people were absent on holidays were contributing factors responsible for the disappointing attendance at the Spring Fair on Friday, 25 August. The Fair, sponsored by the Maleny and Districts Horticultural Society in aid of the Maleny Ambulance Centre, attracted good entries in the various classes, many of the exhibits being outstanding and worthy of a place in any floral show.

Well stocked stalls which included produce, cakes, sweets and needlework catered for the wants of the patrons and the Maleny branch of the QCWA provided morning and afternoon teas and luncheon. 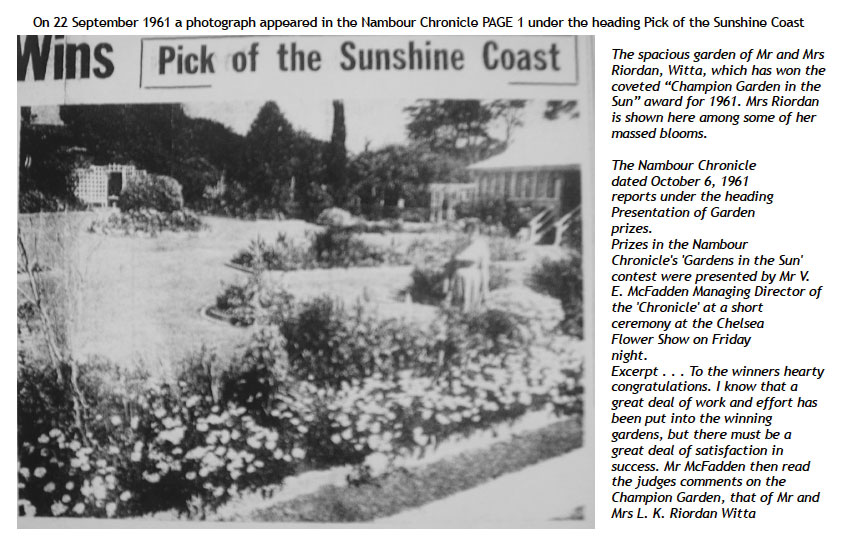 The ninth Annual Meeting and Election of Officers was held in the John Perry Memorial Hall.

Subscription: It was decided that the annual subscription remain at 5/-.