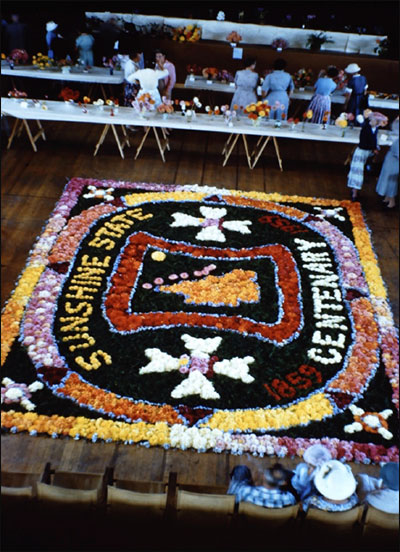 The carpet measuring 20 feet by 14 feet was appropriate for the Queensland Centenary year and was outstanding in design and floral art. It consisted mainly of Dahlias, the centrepiece being a map of Queensland with a coral reef and the rising sun at each side. The words Centenary and Sunshine State stood out in colourful blooms. The years1859-1959 were also emphasised.

Mr Robinson commended Mr and Mrs R. Burnett, Mesdames H. Hughes, A. Webster, A. Plucknett, I. Dunsdon and L Riordan who were responsible for the work of art on the carpet. He also spoke very highly of a wall arrangement Down the Deep Gorge designed by Miss M. Tesch. This consisted of natural products of the earth.

At night the young people danced around the carpet. The proceeds for the School of Arts amounted to approximately £85/-/-.

At the Dahlia Show/Autumn Fair. Mrs Waters won the Patrons Trophy with a bowl of Dahlias.

At the Spring Fair the Patrons Trophy was won, for the third time, by Mrs Bergann with four excellent Iceland Poppies. 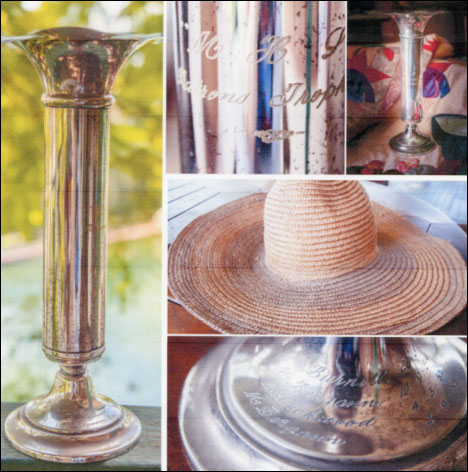 The seventh Annual Meeting and Election of Officers was held in the Church of England Hall.

Officers elected to serve until the AGM 1960:

Subscriptions:  It was moved by Mrs Hawkins that subscriptions remain at 5/- per year, seconded by Mrs Martin and carried.