The Floral Carpet – Autumn Fair 1957
The design was prepared for 1956 when bad weather forced a cancellation. 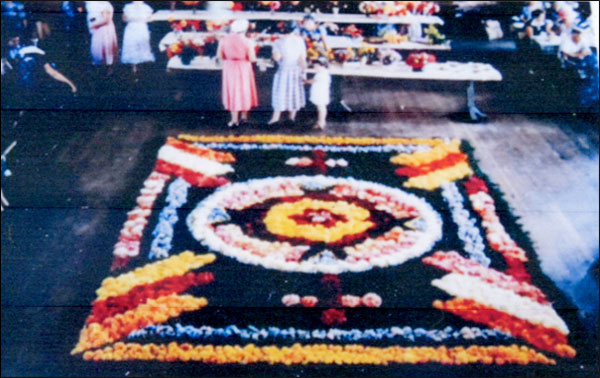 Commenting on his observations at the annual Dahlia Show of the Maleny Horticultural Society, the judge Mr Robinson (Brisbane) said the quality of flowers was well up to Brisbane standard and the floral carpet equal to the best seen anywhere. Although the number of entries were slightly down numerically, the beauty and type of blooms were magnificent. Proceeds went to aid the building of the new School of Arts.

The fifth Annual Meeting and Election of Officers was held in the Church of England Hall.

Subscription: Moved Mr Burnett seconded Mr Prentis that the subscription remain at 5/- per year and 2/6 for second half year to new members.

Records of the Bureau of Meteorology (BOM) indicate that 915.2mm of rain fell for the whole year making this the driest on record for Maleny.