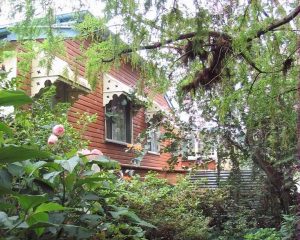 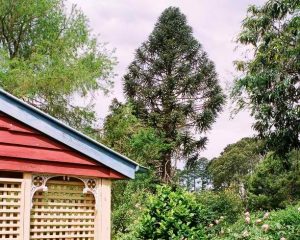 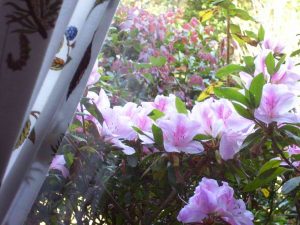 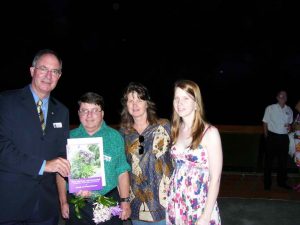 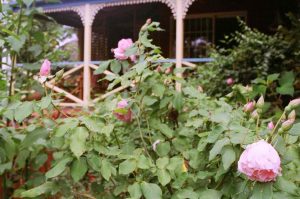 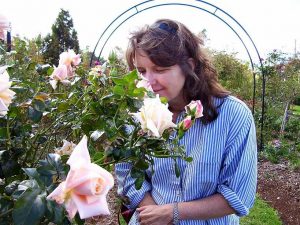 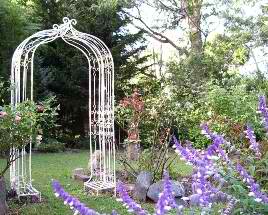 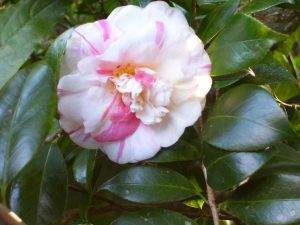 A Brief History of “The Shambles”

Moving to Montville from Brisbane seventeen years ago so Michael could begin his Medical internship at Nambour General Hospital on the Sunshine Coast was the beginning of a new stage of life for the Simpson family.

With two little girls already and a boy born two weeks after arriving, our family has really grown up at ‘The Shambles’

“For years when living in Brisbane (Indooroopilly and Sandgate) we felt hemmed in by neighbours and the garden became too small. We had a little painting, on a place mat, of a farm house in the mountains that we longed to have” says Kyleigh.

After finding the run down farm house on an almost level acre of land only a kilometre from Montville we set about making our new home.

House renovations were first on the agenda which gave us time to explore the remnant garden and plants around the property. A huge Duranta hedge which tipped out onto the road hid the house. A dense overgrowth of small and large leafed privet and lantana encroached along the Western boundary. These hedges were originally planted as wind breaks and when the August gales arrived we wisely decided to trim back the hedges rather than the herculean task of having them cut down.

The mature surviving trees in the garden included Macadamia, old astringent Persimmons, grape fruit and Custard apple. Ornamental shrubs such as Azaleas, Brunfelsia, Spiraea, Hibiscus and a very large Camellia (Aspasia Macarthur) with stunning variegated pink and white flowers were there to be rescued. Our mature specimens came with epiphytic orchids and ferns. In spring there emerged Hippeastrum, wild gladioli and Arrowroot.

Having little money to spend we began the garden with tube stock and cuttings from local gardens. Friends gave us trusty reliable agapanthus that grow prolifically in the area and can be dug up in a clump and planted at any time of the year. Agapanthus, Bromeliads and Clivea are great survivors and flower beautifully in Summer.

From early on a rainforest was created along the western side of the property which has created lovely summer shade. Before that, months were spent hacking back privet and lantana to reclaim space and a chook house was built half way down the yard. Around the house a large productive vegetable and herb garden was established and the children acquired numerous pets and the days of escaped guinea pigs in hedges and amongst the vegetables will never be forgotten.

“Our children have always played outdoors and having a baby in a pram and the girls playing nearby I was always able to work outdoors”, says Kyleigh. As the garden is quite large it has evolved into sections and whole days could be spent working in an area. However with kindy, school runs, art, household and work activities gardening has never been considered as labour intensive and more as relaxation and exercise.

To Michael and Kyleigh the garden has always been satisfying and the changing mountain weather is something you never tire of. “We love the fog enveloping the house and the drippy branches weighed down after rain. The crisp, cleanness of the air is lovely but the red dirt and getting bogged in your own driveway could be a challenge. Drying nappies in prolonged wet weather also stays in my memory and recently the discovery of a mushroom growing in the bathroom reminds us we really are in the clouds”, says Kyleigh.

Over the years we have collected and conserved many different traditional plants, inspired by the remnant garden. The large conifers in the north of our garden started as our family Christmas trees and were planted out after the festivities each year.

The China and Tea roses are Michael’s particular interest and he is on the committee of the Heritage Roses in Australia, with their national tour coming to “The Shambles” in 2010. The old fashioned roses have much to recommend them with repeat flowering, disease resistance in our weather and an amazing link to Queensland’s garden heritage. There are year round cut roses for the house. Kyleigh loves to pick flowers for vases and is not fond of floristry style arrangements preferring random bunches. Sometimes this means just wandering around with the secateurs choosing all the pinks shades or the blues and mauves.

Other interesting shrubs we have collected are the species Camellias, Michelias, Weigelas, Buddlejas, Abutilon, Spiraeas, Brunfelsias and a myriad of Salvia types.

“Aromatic herbs such as Heliotropes and Rosemary” are among my favourites said Kyleigh and common Pentas are long lasting in the vase.

The appearance of maturity in a garden is a very rewarding aspect to strive for. In Queensland this maturity can be achieved relatively quickly. Instant “designed” modern gardens always look contrived as they have few surprises, but a garden continually enriched with ornamentals will be textured, aromatic, colourful, surprising and is deeply satisfying. Our garden is a place where our family and garden have grown together, giving us all a heritage which builds on the traces left by other families her over the last century.

We hope our visitors can enjoy “The Shambles” and appreciate that our garden, our books and our plans for the future all contribute to Queensland’s rich gardening and cultural Heritage. Preserving landscapes, plant collections and documenting the garden inventory is not some sort of rarified

intellectual exercise. These increasingly rare old gardens may be powerful examples to guide a much healthier and happier society in the future.