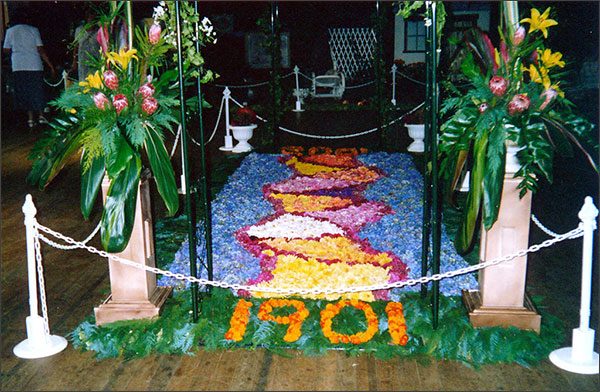 Autumn Flower Show: Plans are well under way for the forthcoming Autumn Show. Help is required from members in all areas. We need plants, flowers, produce, craft and cakes for the stalls as well as many flowers and small amounts of short lengths for the floral carpets and displays. In addition we are expecting a number of busloads of visitors from regions around South East Queensland who will be expecting lunch, morning and afternoon teas. Could we please have as many cakes, slices and biscuits as possible on both Thursday and Friday of the event.

An approach is to be made to Moira Jones to dress up in period costume to advertise the Autumn fair. Molly Cock to contact administration at Maleny High School as to the possibility of the school choir singing some Australian songs during the Autumn Fair. Heather Jones to be contacted regarding a display of bark painting and Lisa Plucknett concerning a poetry recital, both during the Autumn Fair.

The final plans for the Autumn Fair were outlined:

Distribution of Funds: The total profit from the Autumn Flower Show was $3,876.70. The Committees recommendations for donations were:
The Community Hall $1,500.00; Maleny Kids Club $250.00; Maleny Scouts $250.00; Maleny Hospital $250.00 (Family room items). Other suggestions :  Norma McLeod recommended a donation of $275.00 to Maleny Hospital for a bedside table. It was moved that this and the above recommendations be accepted,  The remainder of the surplus monies will be held for future donations later this year.

Mal thanked Artistic convenors Marianne Parry and Margaret Stevenson for their wonderful efforts over many months to make the event such a success and to all members who worked so hard in preparation for and during the three days of the Fair. He also made special mention of the beautiful quilt made and donated by Nan Hooper for an additional raffle.

Change of Date: A discussion followed on whether to change the Fair date from Autumn to Spring. No decision was made.

Reinstatement of the Spring Fair: The Committee is interested in reintroducing a Spring Flower Show with a possible date being 14/15 September 2001. This will be discussed at the General Meeting.

Presentation of Photo Album: Daisy Armstrong has given her photograph album to the Club. This is wonderful pictorial record of Autumn Flower Shows from the mid 50’s with some newspaper clippings. Ivy Cox and Olga Webster arranged for the Club to receive this.

Following our letter of appreciation to Daisy Armstrong regarding the photo album, she phoned to say the photograph album we received recently did not belong to her. She suggested that it might have come from Daphne Prentis or her family. Daisy recalled her memories of the Clubs Flower Shows in the 1970’s.

Reinstatement of the Spring Fair: A lengthly discussion followed on the reintroduction of the Spring Flower Show. The Committee was in favour of this but was undecided about a format. It was suggested to hold a Spring Fair this year but it was decided there was insufficient time to plan adequately. Members agreement and ideas will be sought at the next General meeting.

Members were asked if they were in support of holding a Spring Flower Show in 2002. A majority were in favour. The Committee will proceed with preliminary plans for this.

Bird of the Month: There was no presentation this month, however Lisa Plucknett offered us a frozen chook.

The forty ninth Annual Meeting and Election of Officers was held on 25 September.

Loud Speaker and Sound System: This had been kindly lent to us by Val Rickaby who has recently resigned from the Club. It is felt the Club should return this and purchase it’s own system. Mal Price will cost this and Ivy Cox will investigate the possible donation of a compatible system to the Club.

Newsletter: Ann Sayers is keen to start a newsletter for the Club. A discussion followed and it was decided to trial this in 2002 with Autumn, Winter, Spring and Summer editions. Members will be asked for their help and contributions. It was suggested a sub-Committee be formed. It is hoped that someone with computer skills will offer to work with this Committee. Ann Sayers offered to compile the newsletter. Molly Cock would be interested in assisting as one of the members.

Newsletter: Mal Price has prepared a questionnaire to try and elicit support from members for the concept. This will be distributed at the Christmas Lunch.