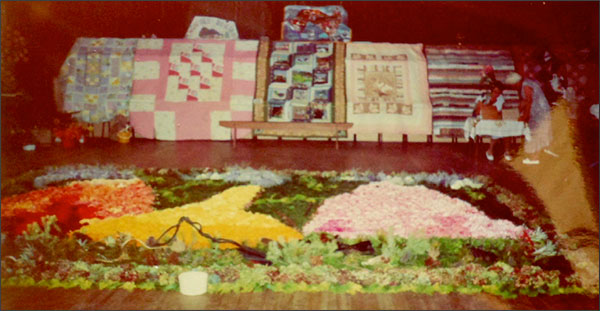 See the display of quilts behind the floral carpet

Autumn Fair: It was reported that Mrs Peg Burnett is willing to design and supervise Floral Carpet. It was suggested that an approach be made to Mrs Mary Fleiter (Conondale) re entry of a quilt display. Also that Mrs Heather Jones be asked if she would put on a small display of bark paintings and perhaps a demonstration.

The Maleny Horticultural Society will feature the Glasshouse Mountains in its Floral carpet display at the Autumn Fair on Friday, March 10 at the Community Centre. Doors open at 9.00am on Friday and also on Saturday morning. Other attractions will be floral arrangements, paintings, quilts etc. Raffles will include a painting by Sylvia McNall. Morning tea and a light lunch will be served by the CWA.

Twenty years ago Alan Lockwood, a member of the Maleny Horticultural Society, decided not to leave his beautiful display of dahlias to the mercy of an impending cyclone. The Autumn Floral Fair was just four days away and his blooms couldn’t wait. Instead he picked them all! Consulting with other members as to their use now picked, he spread them out on the floor. Gradually the idea of pushing the multi-coloured display into patterns and shapes developed —– and so was born the Annual Autumn Fair Floral Carpet.

Every year a new design is painstakingly fashioned from many and different varied flowers but still the dahlia predominates. Member Peggy Burnett has designed and supervised the placing of the floral carpet for many years now and every time she comes up with a new brilliant new idea.

This year the Glasshouse Mountains were gloriously displayed and what a picture it made.

Congratulations to the Horticulture Society! 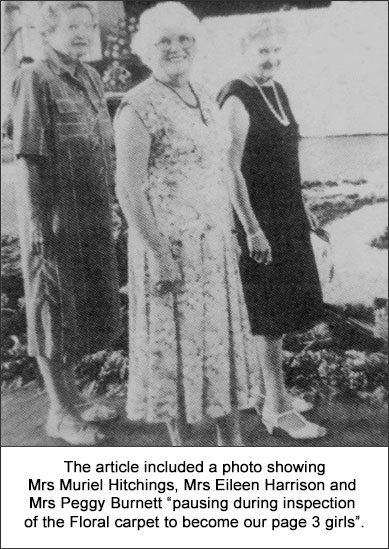 Takings for the Autumn Fair.

The Community Centre acknowledged the Garden Society donation which was put to use in the re-modelling of the kitchen in the Main Hall and towards a ‘good refrigerator’.

The passing of Mts V. (Doris) Waddell: Mrs Phyl Walters advised that one of the Foundation Society members (Mrs Doris Waddell) had passed on.

At the JULY meeting Members were asked if they agreed to the change of name, Mrs Phyl Walters warned of the cost of a new badge. All agreed that the current personal badge could be used.

At the OCTOBER meeting Mr Webster then said that there had been much discussion about changing the name of the Society. A proposer was asked from the floor and Mr Jim Hitchins proposed that the Society now be known as the MALENY GARDEN CLUB. Seconded and adopted.

The thirty seventh Annual Meeting and Election of Officers was held in the RSL Hall on 27 September.