Celebrating the victory of Australia II in the Americas Cup 1984
Lady in the photo identified as Jenny Horn. 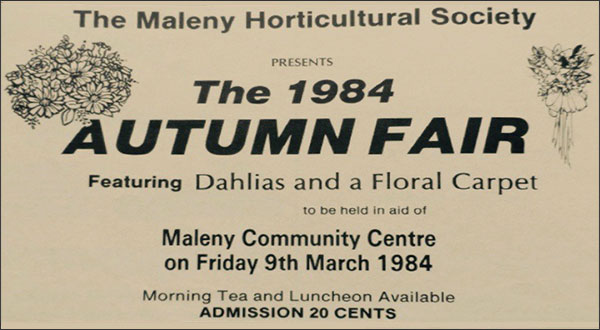 A discussion on the design for Floral Carpet was held, Two themes were suggested: Olympic Games logo and Australia II. It was decided to leave the decision to the convenors of the Floral carpet.

Details of the Autumn Fair were then discussed and a floral carpet design accepted.

From an article in the Nambour Chronicle:
“The Maleny Horticultural Society is appealing to all keen gardeners to start planting dahlias. Why? The Autumn Fair for 1984 will feature a floral carpet and we will be appealing for dahlias for same. We also hope to feature a class for dahlias, and who knows? You may be the proud winner if the Champion Dahlia of the Show.”

The thirty second Annual Meeting and Election of Officers was held at the home of Mr and Mrs R. Skelton on 25 September.

Spring Fair
President Phil presented a very interesting report on the Club’s activities for the past year. His report revealed that the average attendance for the year had increased considerably and he reported on the success of the recent Spring Fair, proceeds of which amounted to $527.50.

Preparation for the Autumn Fair and Floral Carpet 1985

A committee to be formed to design and create floral carpet. Mrs Burnett to be asked to be in charge. Mrs I. Bowman and Mrs Greinke offered their help. Mr & Mrs Allen said that pine for the carpet may be obtained from their property. Mr P. Prentis and Mrs A. Jeremy offered to collect pine.