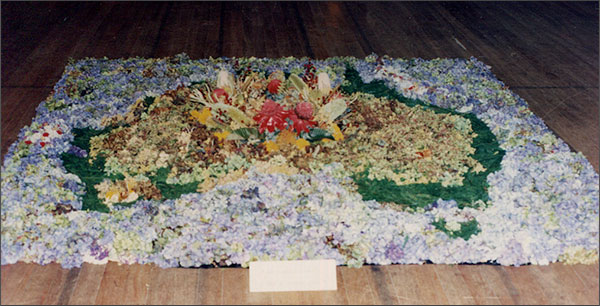 Autumn Flower Show and Floral Carpet: Visitors to Maleny Community Centre this week were delighted with Maleny Garden Clubs interpretation of Dorothea McKellar’s poem My Country. At the entrance was a post and rail fence and campfire behind which were beautiful floral arrangements. The carpet depicted a map of Australia surrounded by blue hydrangeas with an arrangement of native flowers and foliage in the centre. Other interpretations took a line from the poem and were arranged around the wall on and in front of the stage. The beautiful opal was very impressive – so lifelike. There is no doubt there are some clever members in the Club. The garden and cutting stalls were well stocked and very popular and a well stocked jumble Stall did a brisk trade. Hard workers in the kitchen serving endless cups of tea/coffee and sandwiches, cakes etc. New member Lisa Plucknett entertained with renditions of My Country and other Australian poems, interspersed with lively tunes on the violin. All in all, an affair to remember. 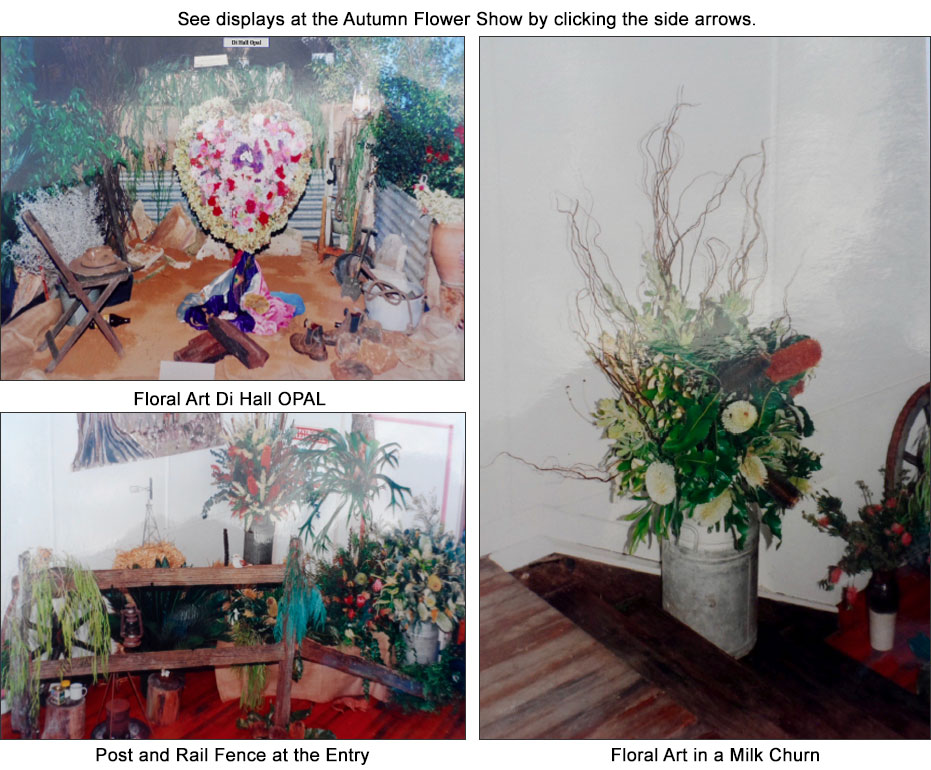 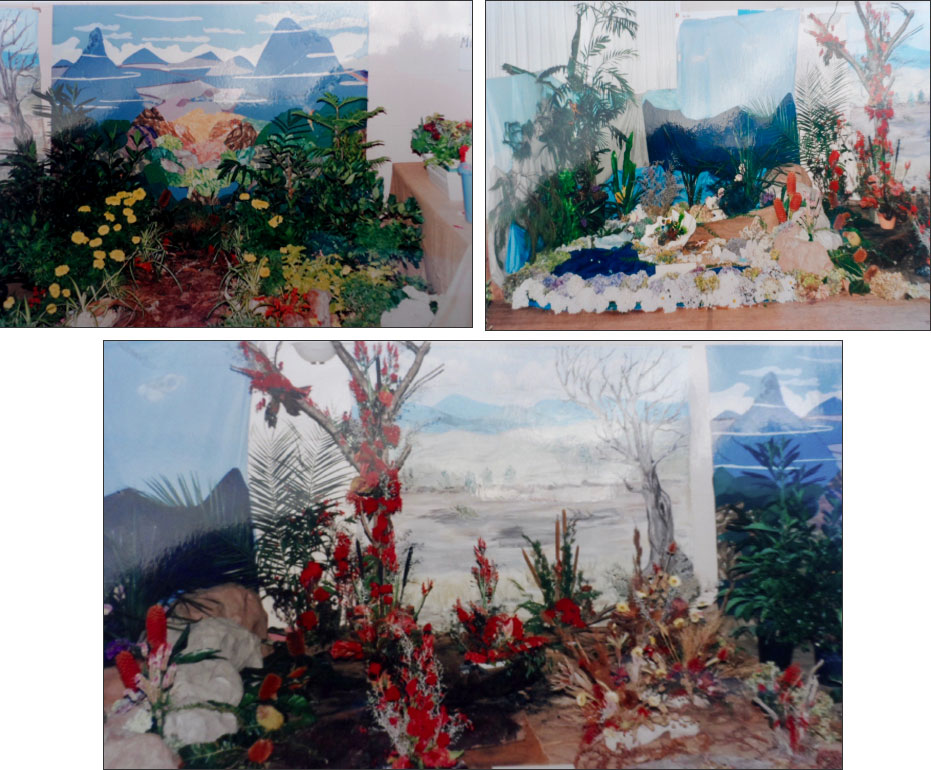 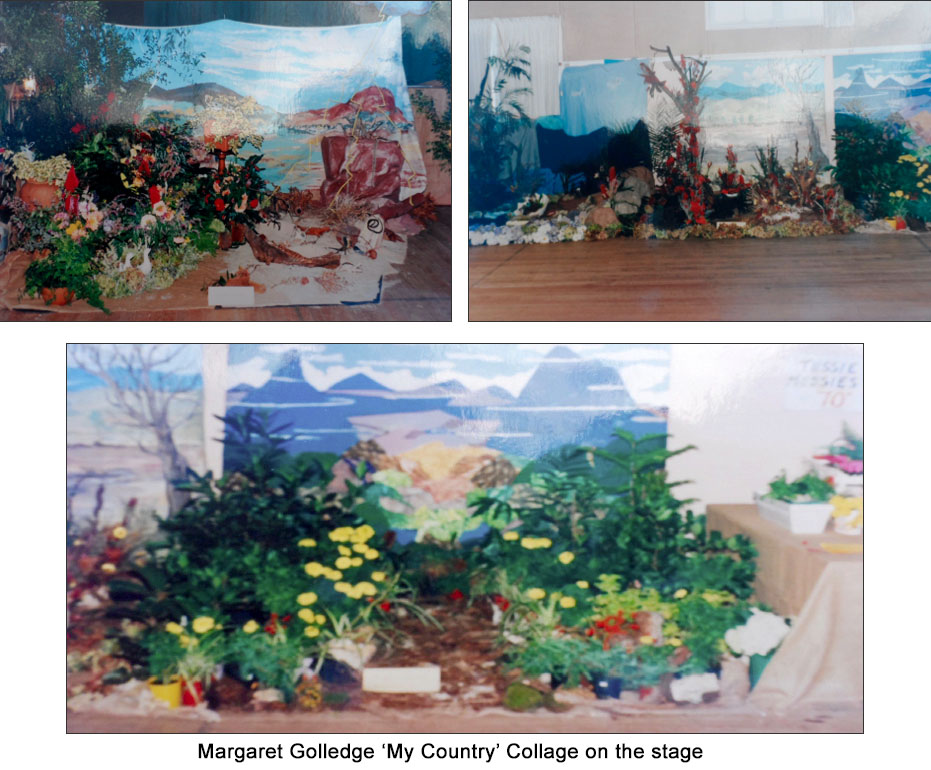 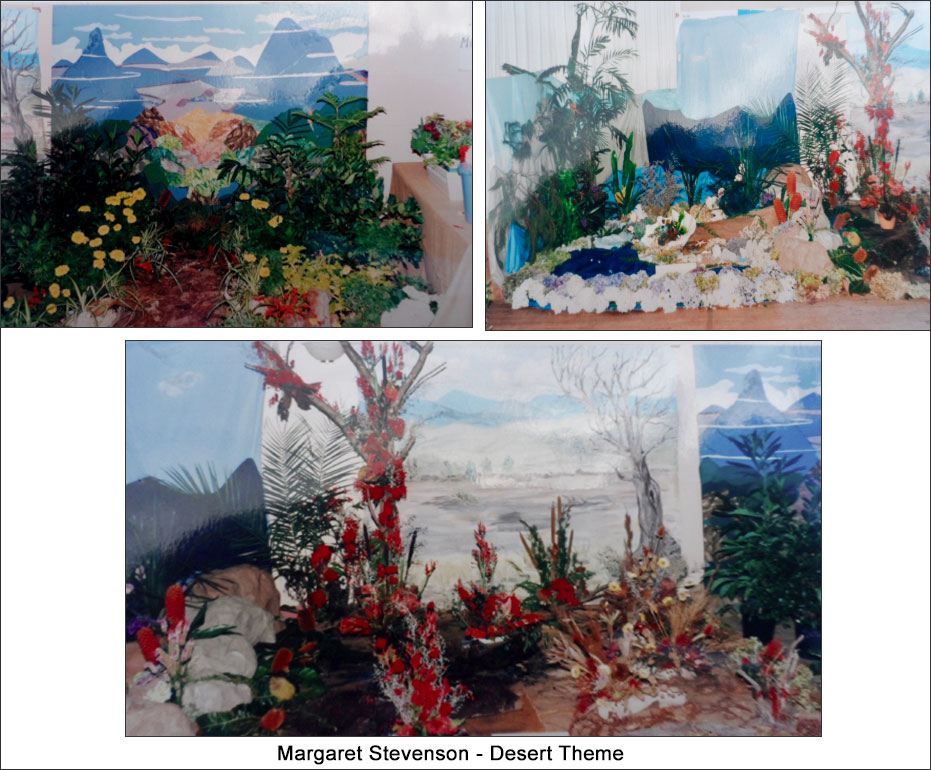 Distribution of Funds from the Autumn Flower Show: A detailed list of costs re renting the Community Centre was brought to our attention and it was suggested that our donation to the Centre was generous. In the light of this we asked members for a discussion re this. After explanation from Shirley Hollonds re the Hall Committees loan obligations, and the necessity to keep the Hall as a centre in town and not lose it, it was moved that $1,500.00 be donated to the Community Centre. There was a show of hands and this decision was unanimous.

Harvey Bryce of Maleny Historical Society said he was delighted with the generosity of the Maleny Garden Club. Not only is the Club preparing to establish an Old English Garden at Pioneer Cottage, but it is providing the wherewithal to erect a picket fence around the garden and building and to maintain the garden when everything is in place. Timber for half of the pickets has been generously donated by Grigor Sawmill of Peachester. Harvey says that recent donations of raffle prizes, paint, volunteer time and work are indications of growing interest and support for the work of the Historical Society.

Friendship Day Planning: It was suggested that the garden club run a garden competition in 2000. Members were interested in the idea, further discussion required possibility sub-Committee to plan. A long and extensive discussion followed on plans for the Friendship Day. Members pointed out pros and cons of previous clubs friendship days, it was decided an extra meeting will be held  This will be on 16 September at Marianne and John Parry’s home to fine tune our plans.

On Friendship Day Berry Jones will come with his keyboard he would like to provide background music on the stage. Lisa Plucknett will recite her poems and play the violin. Bell ringers were discussed, but possibly not enough time for them.

The forty seventh Annual Meeting and Election of Officers was held on 28 September.

From the President’s Report:  I would like to pay tribute to two members that passed away during the year. They were Yvonne Black our Program Director (Organiser) and Thalia Skerman life member and holder of several executive positions. Sadly the husbands of two of our long time members, Helen Dobbs and Lyn Hallam also passed away.

Don’t miss the opportunity to enjoy three superb gardens around Maleny this weekend. All the gardens are within half hour of each other.

Set high on a ridge with commanding views to the Glass House Mountains, Moreton Island and the Conondale Ranges, ‘The Old School House Garden’ is a peaceful retreat. Whilst in the process of building their home Di and Bill have developed the garden over many years. A delightful cottage was built some years ago, prior to the house being built, and here refreshments can be enjoyed in an atmosphere of yesteryear.

Life Membership: The Committee has conferred Life Membership to Loy Ryan, Anne Jeremy, and Thelma Martin for their many years of loyal support to the Club, letters of their proposals were formally received by the Secretary. The President will arrange Life Membership badges for new and past Life Members to be presented at a suitable time.