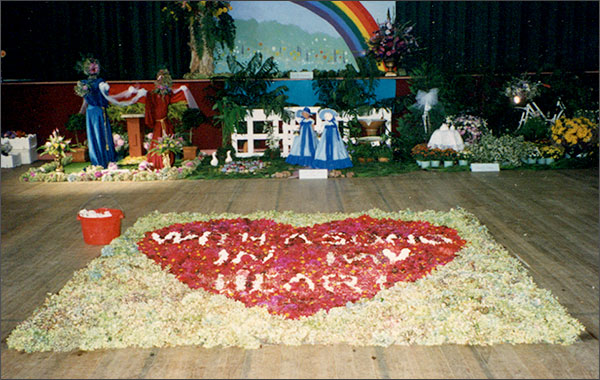 Treasurer Norma gave us a total of monies subscribed to local charities in the years 1991-1997. This was the grand total of $38,207. The announcement met with great enthusiasm. We felt a glow of satisfaction from this result.

Distribution of funds from the Autumn Flower Show:

It was suggested we approach the Council about space for our club’s books. The old butcher shop might be able to be considered. It was moved that $500.00 be held for Library Project.

Future of the Spring Fair: Shirley advised the meeting that we would have a vote at the next meeting on whether we continue with two fairs a year or combine them and possibly have a friendship day. There were many views but no decision. At the following General Meeting a vote was held with the following results:

It was decided in a clear majority of those present to proceed with Option 3,

The forty sixth Annual Meeting and Election of Officers was held at the Maleny Community Centre on 29 September.

From the President’s Report:: We are very sad to have lost two of our Life Members this year. Edna Hawkins was Treasurer of the Club for many years. Eileen Harrison was a very popular and hardworking member and has been missed on the plant stall at the Fairs already. We wish three of our members better health in the New Year. Yvonne has been so efficient with the arrangements of our venues, bus tripos and guest speakers, any one of which is quite a task. Thalia is another of our Life Members and has been one of our longest members, and also Gwen. We wish a better year for you all.

Distribution of Funds from the Spring Fair: Money available for distribution from Spring Fair was $2,118.60. Allocations were as follows:

It was moved that $250.00 be allocated towards a lapel microphone. Brian Rickaby to be approached about this. Malcolm Price wished thought be given to this as it is sometimes very hard to hear the guest speakers.