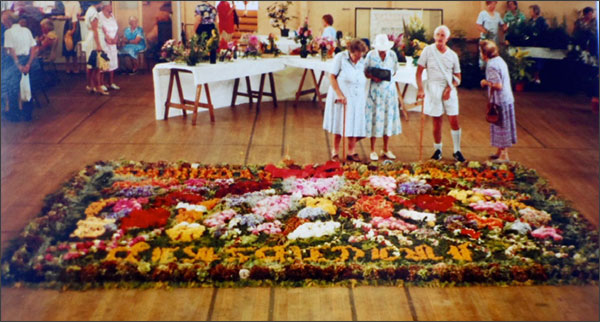 Floral Carpet New Designers: Peg Burnett was not available for the carpet this year. An idea for the carpet, Friendship through Flowers, was put forward. Pat Powell and Corinne Taylor will work on the plan. A letter is to go to Peg Burnett thanking her for all the many years she has worked so hard for the floral carpet.

Constitution: A vote was passed that the constitution be updated and a clause be included that no member shall remain in any one office for more than three consecutive years. If there is no-one else for the position that person can be returned by a vote of 80% of the members present.

Library: The Librarian told of more books donated to the library and members were asked to write the books they required in the borrowing book to save the librarian carrying the library collection each month.

Floral Carpet: Corinne Taylor outlined the design done by herself and Pat Powell. Friendship through Flowers is to be the theme with the centrepiece with a bouquet of flowers. All were encouraged to bring conifer and pine berries, variegated leaves, hard shiny leaves, dahlias, marigolds and hydrangea heads. Muriel and Jim will supply the tarpaulin. Needed also will be some fertilizer bags for those stretchy sides we seem to have with a carpet.

Autumn Fair: President Muriel Hitchins thanked those members who worked so hard to make the recent Autumn Fair a success. She also thanked the members of the public for their support and patronage and announced that the sum of $1,400.00 had been raised and presented to the Community Hall Committee.

It was suggested we should make an effort to get school children involved and thought floral saucers to be a good idea. The Olympic theme or or perhaps a Spanish theme were suggested for the floral carpet to 1992. It was left to the Committee to discuss. Perhaps drawings could be brought along to the next meeting. The size of the carpet should be 15′ x 20′.

Incorporation: At a late stage in the meeting many ladies had to excuse themselves but an interesting discussion followed re incorporation and insurance for our Society. A lot of ladies did not realise the implication of such a move. The outcome of the discussion is letter to go to Justice Department for details.

Incorporation: There was much discussion about this and it was decided to go ahead with a special meeting to discuss and vote on whether we should incorporate or just take out special insurance for the Spring and Autumn Fairs. This meeting will be held after the General meeting which follows the AGM on 24 September at 11.00am. Letters to go to all financial members. At the special meeting it was decided that we proceed with incorporation. All members agreed. It is proposed that Maleny Garden Club apply to the Department of Justice and Corrective Services to incorporate under the Justices Department. Shirley Hollonds was appointed to act on our behalf. Incorporation will be discussed at a Special meeting in January 1992.

The thirty ninth Annual Meeting and Election of Officers was held in the Maleny Community Centre Hall on 24 September.