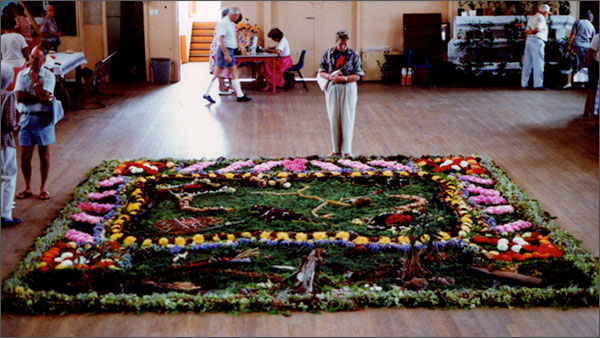 Constitution: The aims and objects of the Garden Club were presented. It was resolved all members be given the opportunity to have a copy of the Constitution.

Floral Carpet Discussion and Planning: Peg Burnett showed the Aboriginal design for the Floral Carpet for the 16th Autumn Fair. Members were asked to bring along nut cones, banksia heads, bunya nuts, and berries for the central design and dahlias and other long lasting flowers for the borders. Members were urged to arrive at the hall 9.30am on set up day with plenty of enthusiasm, cutters and, lunch for a busy day of setting up.

Name Badges: Proposed badges were circulated. Several members had suggestions, There was much discussion and difficulty in coming to agreement on whether the names on the badges should extend over two lines or only one  We trust they will be well received ofter all this kerfuffle over such a small thing.

Autumn Fair: The President thanked all who helped in any way at the Autumn Fair. Special thanks to the ladies who manned the plant stall, the cake and handicraft stall. The Aboriginal themed floral carpet was a huge success and well received. The Viraya Rhododendron was much admired but sadly there could only be one winner.

A letter was to be sent to the Community Centre re monies being spent on chairs for the hall. A letter to be sent to the ladies of the CWA who worked so hard. It was suggested that next year some of the high school students be asked to help with the set up tables as part of their Community Help Program.

It was proposed that next year we look for more community support. Members were asked to support the floral art and cuts display. This year support for these was very poor. A suggestion was made to ask the Peachester ladies to display.

The nursery was well received but should be asked to provide a wider range. There should be more displays around the edge of the Hall to encourage different sections of the community to be involved

The President noted that we would never please everyone but all members should be encouraged and we should do better for our Spring Fair.

The proceeds of the Autumn Fair were handed to the Committee of the Community Centre and amounted to $800.00.

At long last the secretary showed the design of the new badge on three different backgrounds. On the show of hands it was decided to use the cream background with a pink camellia. The cost is $2.50 per badge.

The Monthly Schedule: It was explained that this is intended primarily as a learning part of our meetings.

The Monthly Schedule was once more changed:

June to Hibiscus. July to Camellia. November – Either of 2 single or double Gerberas

The thirty eighth Annual Meeting and Election of Officers was held in the Community Centre Hall on 27 September.

Preparations for the Floral Carpet for 1991:  Peg Burnett, who has been the inspiration behind many a floral carpet, suggested that the art group at the High School be asked to enter a competition to design a practical 12 x 10 carpet design.