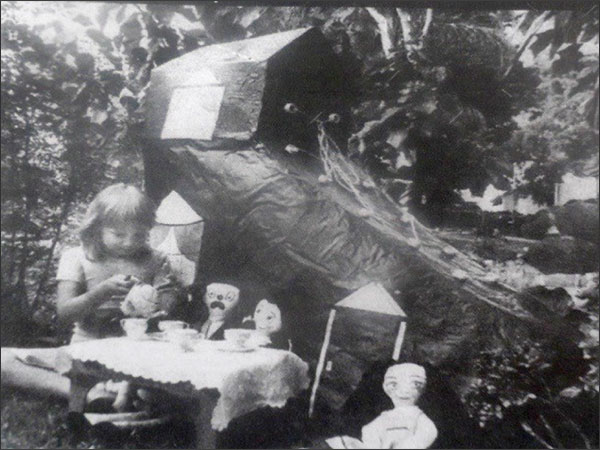 All the children from the Primary School visited the display and many found the visit most enjoyable and asked many questions. There was a competition for children’s dressed dolls, and a dahlia show in conjunction with the display.

Madame President thanked members for the displays at the Autumn Fair which was admired by all. Funds raised to the total of $458.30.

Autumn Fair: As always, the Autumn Fair, arranged by the Maleny Horticultural Society in aid of the School of Arts, was both a visual and financial success. In the International Year of the Child, the theme chosen was Childhood Fantasies and the stage decoration set the scene. It was a huge floral picture and from the frame of pastel dahlias, to the ‘Carrot and Pear’ men, the seesaw sky of blue hydrangeas and grass of pine leaves, all were of natural products. All around the Hall were scenes depicting children’s stories.

The old woman and her charmingly dressed children had a huge brown shoe as a home, complete with windows, a green roof and a chimney pot. Jack was busy chopping down the tall beanstalk to prevent the giant rescuing his harp (made from marigolds) his sack of gold, or his white hen, while large black bean pods growing on the vine showed just what it was. Little Bo-Peep and her dog were seeking her sheep which were hidden from view by a large bank of pastel flowers, gathered around a rocky pool and the Gum Nut people were sailing a bark boat, equipped with leafy green sails, on a sea of hydrangeas with a background of Australian ferns, palms, mosses and vines. The story of Hansel and Gretel was strikingly depicted with both children in folk costume, Hansel being in a cage in a tree, with remains of his food with him, while Gretel watched the wicked witch who had several broomsticks in front of a very detailed cottage complete with red and white picket fence. Paper Mache figures of the characters in A. A. Milne’s ‘The Kings Breakfast’ told the story of the King who wanted butter on his bread, in a setting of flowers and greenery.

Between each story were delightful floral arrangements, on stands and these added to the delight of the scene.

The twenty Seventh Annual Meeting and Election of Officers was held at the Maleny School of Arts on 25 September.

Gardens in the Sun Competition

“Ellen is the gardener, Keith is the carpenter and mower of the lawns that link the different sections together. Worries of the Maleny district gardeners are strong winds and heavy rain. The Riordan’s need not fear dry spells like the present one, because they have their own well water. There is also a constant need for mulching and replenishing with compost to maintain the necessary nourishment in the soil. “Vital elements are quickly lost from the soil in rainy weather up here” Ellen explains. The days don’t have enough hours to allow the Riordan’s to to do all they want in their garden. They’re up at dawn and leave at dusk. Before the morning’s pruning begins, the pair usually take time out just to enjoy the garden. They stroll down the various paths past the bird baths, the waterfall and fountain, noting new buds that may be showing in the flower beds or weed that is growing in the fish pond. “Every morning and late afternoons are best times there” says Ellen. The rest of the day is for work, our labour of love as she calls it. If she has a tip for other gardeners it is to include as many different types of white flowers as possible to mingle with the colours.”White and blue give a garden a fresh, colourful appearance”. Roses don’t grow well in Maleny, yet the Riordan’s have produced some beauties, the best of them growing in pots. This is quite an achievement especially as theirs is an organic garden free of commercial fertilisers or pesticides to fight the many attackers of rose bushes. Altogether the Riordan garden is a picture and sure to attract hundreds of visitors. When they come Ellen hopes they’ll read the sign and drop a few coins in the Cancer Fund box. She will also open to the public her collection of 3,000 old bottles admission 50c”.