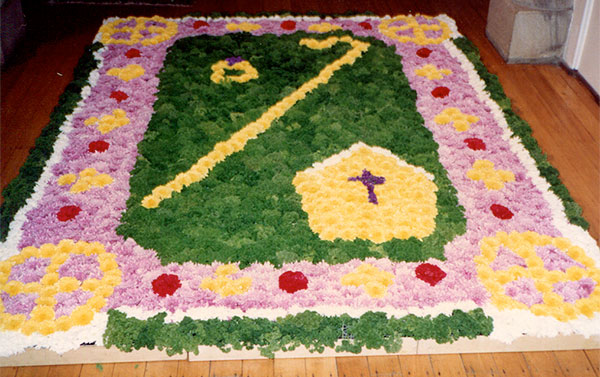 *It is thought this was the floral carpet in 1978.

Preparations for the Autumn Fair.

The Floral Carpet at the Autumn Fair

The School of Arts Hall was a mass of flowers and greenery and in spite of the wet weather many people went to see the display with its theme When the Saints chosen as it was St Patricks Day.

The stage area was used to represent the Irish saint with a background of large pine trees festooned with ivy trails. The scene was set by a carpet of green leaves and moss, a pond with moss covered logs, ferns and two green tree frogs. Little men with banksia faces, coloured leaves for clothes and bark hats with flowery feathers were hiding in the ferns, behind stones or sitting next to toadstools and a small hut made from tree branches completed the fantasy of an Irish forest. Red and white was the theme for St George and this display included a fire-breathing dragon covered with red and green coleus scales with large yellow dahlia eyes. Other saints represented in the display were St Francis, St Mary, St Peter, St David and St Andrew, all imaginative and artfully constructed. Also on display was work by the Maleny Art and Crafts Group including paintings, leatherwork, canvas work, petit point, crochet and wood carving.

Following a discussion Mrs Cooke moved that the theme for our Autumn Fair next year be Childhood Fantasy, seconded Mrs Armstrong.

It was decided that the 1978 Spring Fair would be the Club’s tribute to the Centenary of Maleny and would be held on 25 August, 1978.

“Maleny’s Centenary was the theme for the design of this year’s successful Maleny Horticultural Society Spring Fair. The Maleny School of Arts was the setting for the Fair, in aid of the Maleny Ambulance. The bush setting with native plants has a bamboo stable thatched with bladey grass and Milly the horse made from natural materials was leaning out to survey the chickens and ducks. The campfire with rocks glowing red and an old black billy and camp oven, old horse collars, an axe-mans springboard and a broad axe all helped to remind everyone of the pioneers.

Judges for the day were Mrs M. Masters of Woodford and Mrs M. Ferris from Cedarton. They had a major task as there were a number of entries in many sections.

There was a good attendance of the public to see the display and the floral art section had many beautiful arrangements. Many of the cut flowers were also impressive. Members of the Ambulance Ladies Auxiliary from Maleny and Montville conducted stalls and supplied meals and the Ambulance will benefit substantially from the day.”

The twenty sixth Annual Meeting and Election of Officers was held at the Maleny School of Arts on 26 September.

Our President Mrs Skerman gave a very interesting talk on her recent trip overseas and gave her impressions of some of the beautiful gardens and parks.