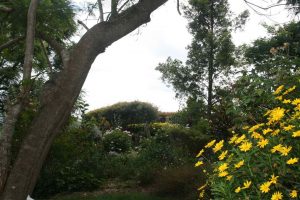 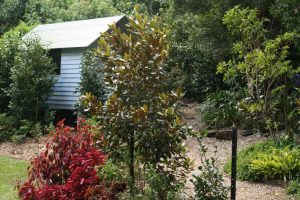 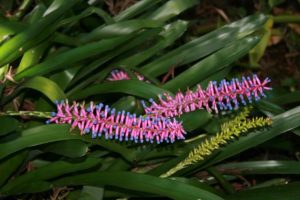 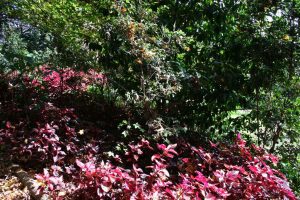 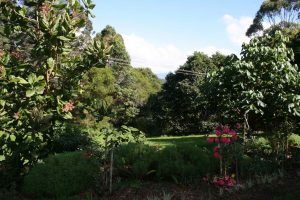 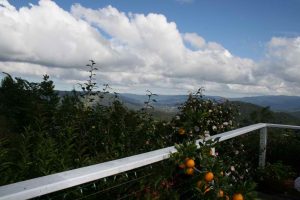 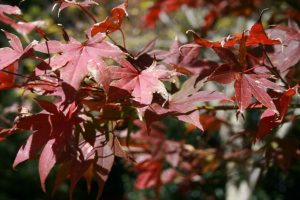 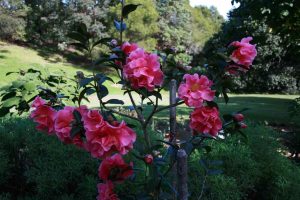 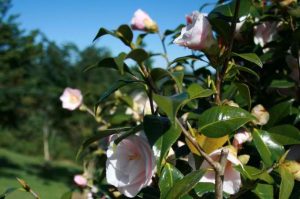 We bought the 52,609m² (13 acres) land on the Queen’s Birthday weekend in 1987 and travelled back and forth to Brisbane at weekends, planting trees.

The house was built in 1999 and gardens were gradually planted. We started with the area at the top, planting the camellia hedge first and then adding more camellias, azaleas, hydrangeas, magnolias, weigelas and, a little later, tree ferns, gingers, bromeliads and ferns in the shady corner – “Ross’ Corner” (named after our neighbour who used to chat over the fence before the house was built between).

Gardens between the Jacarandas were planted with perennials and roses and later the spaced filled in to make a continuous ribbon. Gardens either side of the gully were planted mainly with azaleas and camellias which are so rewarding in drought and yet have really loved this year’s heavy rain. Above the southern gully garden the windbreak trees were underpinned with camellias, a few vireyas and Iilly pillys.

The orchard and Camellias, Bottlebrushes and Backhousia Citriodora along the eastern fence behind the house were planted 15-20 years ago, but the stone wall was added later. The oval garden is planted partially over the secondary sewerage treatment area, so has fairly small plants.

Two years ago we were given a Reticulata Camellia “Frank Hauser” by the Camellia Society and had “nowhere” to plant it, so of course a new garden had to be made up below the dam wall. It could not be alone could it, so more reticulatas were added and a triplaris, a Dombeya eupatorums, 2 small roses and lots of bulbs. Then I thought a screen of roses would be pretty east of the shed with a compost area between. The latest project (just finished, but not planted) is a new vegetable garden by the orchard, the original one having been overtaken by roses, etc.

The next project is to line the gully with the leaky dam and then drain from the gate with rocks making a creek bed which should look good wet or dry, I think it might take a year or two.