Molly Cock was responsible for the introduction of the Club quarterly Newsletter Snippets which first appeared in 2002 following an original suggestion by Ann Sayers in 1996. Snippets has been a constant feature of the Garden Club since its introduction. The concept was first discussed in 1996 and at the January 1997 meeting it was noted, The suggestion of a newsletter was discussed and several ways and means suggested. However General feeling was to defer this until a “later date” as minutes, Range News, Grapevine etc, cover at present. The later date became 2002 although to be fair the members responsible for publicity did a sterling job in getting the Club news printed in the local media.

A newsletter sub-committee was established, co-ordinated by Molly with others taking responsibility for various sections.

From the minutes of February 2002: Snippets, the Garden Club’s newsletter, has its first release today, The President congratulated Molly Cock for her foundation work and the committee for their enthusiasm and professionalism in the production of the newsletter”. Editor Rosemary Simmons thanked her committee for their hard work and outlined plans for future editions… Rosemary made special thanks to Ivy Cox’s family who gave a lot of time and expertise in assisting with the first printing. 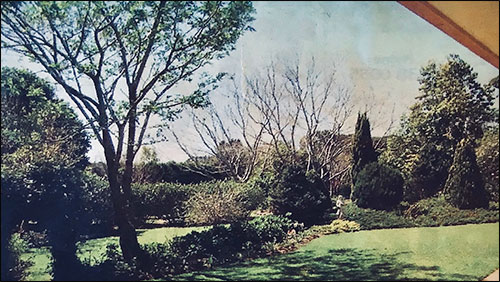 Mollie and Rob Cock have opened their beautiful garden to the public on numerous occasions, including for the for the Australia’s Open Garden Scheme, the Lions Festival of Colour and  Gardening on the Edge. A wonderful shared contribution to the Community of Maleny, the folk who love gardening and have made the journey to the Hinterland, the many charities, churches that have been a beneficiary of their love of gardening.

See details of these open gardens.